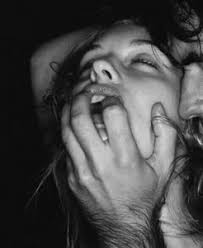 There is this idea. It’s a thought you’ve had over and over again. You discovered it when you were young and it’s persisted through the years. There were times it seemed further away. There were times it was so close you were blinded to everything else. I’m here to remind you of something you already know. This world makes more sense when you belong to Him. It isn’t so drastic that you’re empty without it. You aren’t incomplete. But handing your power to someone you deem more powerful has this way of elevating you.

Can you imagine laying there, completely naked? You aren’t tied up. You aren’t gagged. But the idea of moving or speaking seems impossible. You could be holding your breath and you’d never know it. He’s pacing around you like a predator stamping the ground around His prey. He’s in no rush because all the other predators have run off. His posture and His eyes told them, “This one doesn’t belong to you.”

By now you’re wondering when is He going to dig in, but you aren’t ready. He pets your hair as He looks into your eyes. Try to swallow. Try to blink. Open your mouth like you have something to say. That young version that dreamed of this moment collides with the jaded version of you who thinks it’s all a pipe dream. Both of you are on your knees begging Him to put claim what’s His.

Feel the way that energy is bottled up inside you. Rushing water pounding against a dam before it breaks, rumbling thunder before the skies open with pouring rain, choose whatever metaphor you’d like. In your mind, you’re sprinting towards an opened mouth with huge fangs and saliva dripping from blood-stained points. He moves His hand down your cheek to your neck. If He wanted He could grab you. He could squeeze the air out of your lungs. You wouldn’t dream of protesting. You know He’s thinking it. You know He wants you to think it. But His hand moves along your collarbone to your shoulder.

Inch-by-inch He studies you. You feel exposed in the best possible way. You aren’t worried about your real or imagined flaws. Why? How is it possible you can be this vulnerable and not be worried about what He thinks? It’s simple. He’s so hungry for you your mind shuts off. You feel it in His touch. You taste it in the air. And somehow, you hear Him in your mind. It’s a connection that only prey about to be devoured can understand.

Let go. Give in. His fingers circle your breasts, realize you’re sinking deeper into something unknown. It’s something you’ve imagined for a long time but never fully experienced. There were moments you thought you had it only to have it ripped away. There were instances you compromised so you could have a piece of it. But here, for the first time, it seems real. His hand glides along your stomach and back up to your breasts. He’s moving agonizingly slow. You’re being pulled in two directions. There is the you who wants this more than anything. There is the you who think this is just another false promise. All you have to do is take one more step into the light. Feel the warmth of His dominance. Don’t look back. Leave all of it in the past.

What wouldn’t you give Him if He asked? It’s a question worth answering. Would you please Him every morning with your mouth? Would you be on your knees at the door waiting for Him when He returned home? Would you offer up your womb and have His children? His fingers glide along your thighs and for no reason at all you want to paint His name all over your skin. You want to run in the rain screaming that you are owned. You don’t care who sees you. You don’t care how ridiculous you look. You want to go grocery shopping with a ball gag in your mouth. You want Him to walk you in a park with a leash and collar.

Butt plugs inside you as you wait for scrambled eggs at a diner; getting a tattoo just for Him on your thigh or your hip, He owns you. There is no way to say it with words that would be satisfactory. You could grunt it or cry it, and maybe that would be closer. His fingers part your lips and you realize your dripping wet. He slides one inside your pussy, curved at the knuckle, and you gasp. This is what you’ve wanted refined down into a single moment. But imagine it lasted all the moments. Imagine you didn’t have to wander directionless anymore. Your compass always points to Him.

Lost in the pitch black, stand still. He will find you. He will sniff you out because He claimed you. All you need to do is let go. The only thing left is for you to get out of your own way. Grind against His touch. Squirm as He rubs your clit. Feel Him owning your body. Feel the way He’s taken over your mind. There’s nothing left to give. He has it. Show Him. Feel your pussy aching. Feel that energy that’s been bottled up since the start of this writing, or maybe even longer. Maybe it’s been bottled up for days or weeks. Maybe its been years. Maybe its been your whole life. It’s ready to explode.

Can you imagine His weight on top of you? His lips are inches from yours like He could kiss you at any moment. You taste Him on your tongue. You feel Him in the air. He’s deep inside you. Your hands on His back. Thrust against Him. Need Him like He needs you. Submit to His will. Do you want it? All you need is His permission. Beg for it with your eyes. Show Him that there isn’t a part of you that doesn’t belong to Him. No secrets. No holding back. No lies. No bullshit. No games. Everything stripped down to its bare bones: Dom/sub; Owner/property, Master/slave, Daddy/babygirl. Whatever you seek it’s there for the taking. His voice is grit whispered like a delicious sin. It feels like it’s coming from inside your own head.

iThere are no comments

Begin typing your search above and press return to search. Press Esc to cancel.